Explosionade is the latest from Mommy’s Best Games, the developers of Weapon of Choice and Shoot 1Up. That’s a pedigree that demands at least a download of the trial, and I’m happy to report it’s worth your buck as well.

Quick aside – I just have to say how much I love seeing the developers of great indie games sticking to XBLIG, hopefully gaining a following, and continuing to put out game after game. After sifting through one student project or zombie massage cash-in too many, I can look at the Mommy’s Best, Ska Studios, or radianGames logos and know I’m in for a treat. 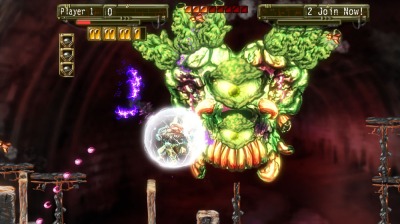 Explosionade is a 2D shooter/platformer with combat reminiscent of Metal Slug and some clever platforming mechanics. You have a normal jump and some jet packs that’ll keep you hovering for a couple seconds. Additionally, you have a recharging shield that’s activated with a pull of the left trigger. Activating the shield in mid-air gives you some momentum, allowing you to bounce and float around.

Jumping, floating, and bouncing eventually become your main modes of transportation. The finesse and technique required to do this (while also conserving shields to actually block bullets) becomes the major joy of playing Explosionade. That, and you can have a second player join in for the game’s 40 stages.

The only real issue with Explosionade is how limited its environments are. I don’t mind repetitive art in a $1 game (especially when it’s this good), but the gameplay left me wanting a bit more room to move around. Every level is limited to a single room and it can get really cramped with two players. 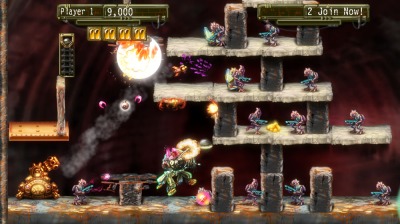 Explosionade isn’t quite the ride that Mommy’s Best’s first game Weapon of Choice was, but it’s at least as good as Shoot 1Up. Like that game, it offers a quick and enjoyable experience for a mere dollar, backed by a level of polish and gameplay refinement that’s still extremely rare on Xbox Indies.