Beat Hazard is a fascinating game – if you can get it working. Before I start talking about the game itself, it’s important to address the simple-to-nightmarish process of getting it to recognize your music collection. Beat Hazard is a twin-stick shooter that syncs the action to your own music, requiring you to set up some kind of streaming solution between your computer and Xbox. I’ve known people who have literally never been able to get this working, and that’s not really the game’s fault, but it’s something to keep in mind before you get started.

The effort is worth it though, at least it was for me. Once I finally got everything synced up and found songs that didn’t lock up the game (a serious issue that is the game’s fault), I entered a kind of synaesthetic nirvana. The excitement of Beat Hazard is, as you can imagine, largely dependent on the kinds of songs you play. Dynamic music seems to work best – songs with a build-up of intensity into a climax tend to give the game a nice difficulty ramp, so my prog metal collection tended to play rather nicely with the game. 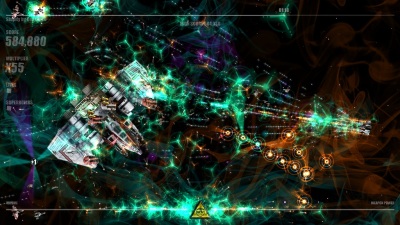 There’ll be some surprises too – I found Beyonce’s Single Ladies to be one of the hardest songs. You will too, as the algorithm that builds the action in Beat Hazard isn’t random, it’s smart. Yeah, the game has a few hiccups – occasionally it takes far too long to send the next wave of enemies your way – but it’s a fair trade-off for how well it typically syncs with each song.

The actual gameplay is good – solid at the very least – but mostly made thrilling by the music integration. The variety of enemies can get boring a bit too quickly because there isn’t a ton of interesting behavior. There’s nothing like those weaselly green enemies in Geometry Wars – everything more or less flies in a set pattern and tries to crash into you or shoot you.

Thankfully, Beat Hazard includes a couple elements that not only keep things interesting, but also more closely tie the music in with the gameplay. For one, collecting power-ups increases your ship’s strength, but more important it increases the volume of the music. If you die you drop your items and the volume drops to a muted, disappointing level. It encourages staying alive not through a high score or progress, but through aesthetic pleasure. The game is more fun when you’re doing well so you want to do well at any cost. 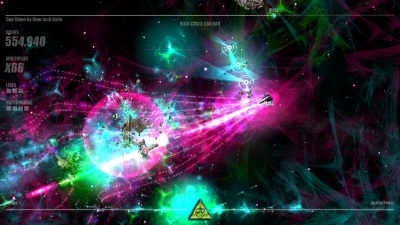 Additionally, as you increase the game’s difficulty, the effects of the music become more pronounced. This is where the game is most likely to lose some people – particularly those who don’t like the psychedelic light-show elements of games like Geometry Wars and Space Giraffe. The game becomes an exercise in visual processing, and the fun of it is the feeling of zen you get when you’re able to see through the rainbow of nonsense.

Once I found the right music and started falling into that aforementioned zen state, I also fell in love with Beat Hazard. It can be a bit of a pain, it doesn’t always work, and it doesn’t hold a candle to Geometry Wars, but it still manages to be brilliant. There are moments in games where everything comes together – visuals, sound, and gameplay in a perfect harmony that gives you chills. These are normally rare moments, but they come so frequently while playing Beat Hazard that I can’t help giving it my utmost recommendation.