It’s hard to ignore the circumstances surrounding Bioshock 2’s development. Original Bioshock developer 2K Boston (now Irrational Games) left the series to begin work on its next big secret project. Meanwhile, an army of five studios led by 2K Marin began a grueling two-year development cycle on Bioshock 2. Along the way, publisher Take Two claimed the new sequel would be one of many, and that Bioshock 2 would sell at least 5 million copies.

High expectations and high stakes were clear influences, and the result is a sequel that feels safe, calculated, and lacks the original game’s magic. Bioshock was full of big ideas in a unique setting, with great writing and enough flaws to justify a second go-around. But Bioshock 2 doesn’t address all of these flaws, and it certainly doesn’t bring any big ideas, opting instead to retread the ground established in the original.

You’ll wander the murky, water-logged halls of Rapture just as you did in the first game. There are splicers to tackle, Little Sisters and their Big Daddy protectors, and a guy with a funny accent stringing you along. The difference is that you’re a Big Daddy (one of the originals) code-named Delta. This is the sequel’s big conceit, and the plot-related reasoning behind the major gameplay improvements. 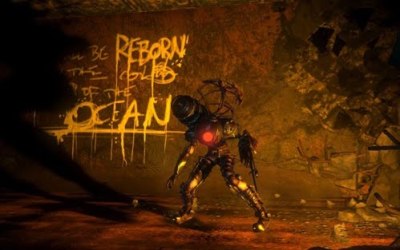 A Big Daddy means big guns, and the result is a significant improvement to combat. Aiming controls are more in line with the current status quo, and the heftier weapons are more powerful than their original Bioshock counterparts. And since daddy Delta was experimental, he’s packing the same Plasmid powers you had in the original game. The difference here is that there’s no awkward switching between Plasmids and guns – you can shoot lightning and your machine gun simultaneously, and the game even throws in a dedicated melee button.

Being a Big Daddy also means the Little Sisters don’t hate you. The moral quandary in Bioshock was whether to save the Little Sisters or kill them – killing earned more immediate rewards, but neither choice offered significant consequences. In Bioshock 2, your choices are kill or adopt – with the former choice acting as a shortcut. An adopted Little Sister will harvest Adam (Bioshock’s genetic currency for purchasing new Plasmid powers) from corpses for you. This process takes a couple minutes, leaving you to defend the helpless girl from an army of incoming splicers.

These defensive moments result in the most novel bits of gameplay in Bioshock 2. Rigging an area with traps before an attack and watching the resulting carnage is quite satisfying. You’ll also have plenty of trap weapons to work with, from proximity-based rivets and mines, to electrified trip-wires and hacked turrets.

But while the combat is improved significantly, and the Little Sister interactions are spiced up, that’s where the improvements end. In so many ways, Bioshock 2 makes what was once magical and unique feel like business as usual. 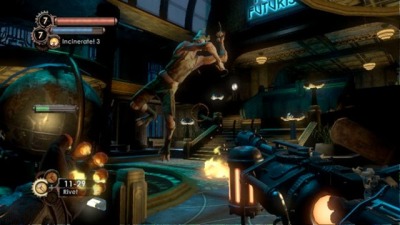 The Art Deco posters and billboards portraying Rapture’s former leader Andrew Ryan are replaced by newcomer Sofia Lamb. Just as Ryan preached his objectivist morals in the original game, Lamb pushes her collectivist code. She’ll even address you in exactly the same way Ryan did in the original – over a TV screen, just before sending an army of splicers through the glass window in front of you. Between that and the southern drawl of your guiding hand Augustus Sinclair (essentially reprising Atlas’s role in the first game), it’s hard not to feel an overwhelming sense of déjà vu.

Making matters worse, the new locations aren’t nearly as memorable as Fort Frolic, Arcadia, or the many other amazing locales in Bioshock. The level design feels busy, overwhelming you with details rather than guiding your eyes toward interesting landmarks. As soon as you get your bearings, the game all-too-often tosses you into a new area that looks nearly identical.

The poor level design is alleviated in the most condescending of ways. The ever-present guiding arrow from the first game remains, despite several more elegant solutions not only in other games, but in Bioshock 2 itself. When carrying a Little Sister, you can ask her to send out a guiding trail to the next Adam-filled corpse. Something similar could have been implemented for standard objectives, allowing players to search out the next clue themselves, or opt for a guiding hand. But considering the state of the level design, particularly in the first half of the game, you’d probably be hitting that button constantly anyway.

More offensive are the sheer number of hints given to you over the course of the game. Follow the arrow and Sinclair will not only detail your next objective, but he’ll repeat it two or three more times as you get closer. The game even doubles up on hints for those not listening, pausing the action with pop-ups that not only explain the game’s mechanics, but take a lot of mystery out of the cooler enemies and situations. The creepy Big Sister is quickly made predictable, and the impact of moral choice in the game is completely deflated by how much it’s explained beforehand. And if that’s not enough, the game includes a hint system that’s optional, but reminds you of its existence every single time you stop to take in the scenery. 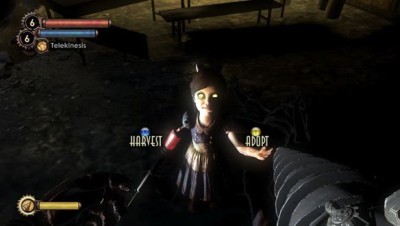 Bioshock 2 feels like a jury-rigged compilation of levels, story, and characters duct-taped together with focus-testing. It lacks the singular vision that made the original game so great. The good parts are sheer mimicry and the best parts are too few and far between. Lacking the heart and ingenuity of its predecessor, it succeeds instead through sheer manpower and budget. Bioshock 2 is not a terrible game, but it’s what we’ve come to expect of a franchise’s tenth or twentieth sequel, not the second.

Oh, and there’s multiplayer: It’s easy to forget, but Bioshock 2’s package is rounded out with a competent multiplayer mode. Competent isn’t enough for an online FPS, though. Sure, it has unique elements like Plasmids, hackable turrets, and Big Daddies, but they’re so pared down from their single-player equivalents that they feel like gimmicks. The skill-based hacking mini-game is gone, replaced with a single button press. Shops no longer dole out an array of items, instead simply acting as health stations. And character upgrades are unlocked Modern Warfare-style over time rather than being purchased. All this simplification puts Bioshock 2’s multiplayer in line with Modern Warfare and Halo in terms of style, with no hope of ever competing with those juggernauts directly. Rather, the developers should have aimed for something uniquely Bioshock – a niche multiplayer mode in the style of Splinter Cell, Chromehounds, or Crimson Skies.