The original Dead Space was essentially a refinement of Resident Evil 4. In that sense, Dead Space Extraction is a more ambitious title, opting to tackle an entire genre. In almost every way it succeeds, offering up the finest light-gun shooter yet.

EA has billed Extraction as a “guided experience”, separating the game from simplistic arcade shooters like Virtua Cop, House of the Dead, and Time Crisis. While these popular series have made subtle advancements over the years, they never really graduated beyond brief, coin-munching entertainment. Extraction earns its distinction by eschewing arcade simplicity in favour of thoughtful, rewarding combat.

Taking a page from the first Dead Space, combat is based around dismembering monsters with a variety of weapons. You do this by aiming an on-screen cursor with the Wii remote and firing with the B trigger. In that way, Extraction can sometimes feel more like a point-and-click adventure than a shooter. It leverages this aspect with some tricky mini games that fit well within the narrative of a mining colony in deep space.

Using your suit’s telekinesis ability, you’ll also spend a lot of time grabbing at the environment. Gun upgrades, health, and ammo are all hidden in the background and you’ll spend almost as much time aiming for those as you’ll spend aiming at monsters. You’ll even collect the occasional note or voice recording which, although cool for playing out of the Wii remote speaker, are often missed among all the action and chaos.

Just like the first game, ammo is in short supply for most of your guns. You’ll always have one pea-shooter with unlimited ammo, and a melee attack to fight back monsters; but these are last-ditch options at best. This creates some uniquely stressful moments when you’re down to your last few bullets. Suddenly every shot counts, and you must use every tool at your disposal – the experience feels unlike any of the trigger-happy light-gun shooters that have preceded it.

And that’s only some of what makes combat in Extraction so unique. Shortly into the game, you’ll come across a stasis module that allows you to slow down enemies. Stasis can only be used on three targets before it needs to cool down, which adds a strategic aspect to picking out the most immediate threats. 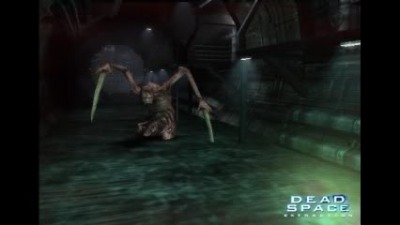 Weapon selection is another huge game-changer for the genre. Sure, you’d pick up the occasional machine gun in Time Crisis, but Extraction allows you to carry three unique weapons at a time, each with alternate fire. Flamethrowers, short-range buzzsaws, and rolling mines are just a sample of the variety. Switching between them with a flick of the analogue stick, and mixing and matching weapon combos, is unbelievably satisfying.

But sophisticated combat is only half of what earns this game its “guided experience” moniker. Extraction stands above the pack by genuinely utilising the advantages of an on-rails experience. Imagine the scripted moments in Modern Warfare, Bioshock, or Half-Life, and then expand those moments into a six hour-long adventure. The result is not unlike taking part in a very long, big-budget, sci-fi/action movie.

The game begins as a prequel to the original Dead Space, casting you as one of the miners on the Aegis VII colony. Things go wrong fast and the colony is quickly overrun with monsters. From there you’ll bounce between roles over the course of ten chapters, making several friends along the way.

This is where Extraction takes a departure from the original game. It’s not nearly as much of a solitary experience – you actually spend almost the entirety of the game with a handful of survivors. Their banter is always a lot of fun and the trouble they get themselves into really keeps the pace up. If the characterization in the original Dead Space didn’t do anything for you, this one might not change your mind, but it’s still a marked improvement.

It helps that despite being on the Wii, character models have held up surprisingly well. The brilliantly animated cast feel realistic because they maintain that substantial and solid feel they had in the original Dead Space. The environments around them seem to be a bit more muddy as a result, but it’s a fair trade-off. What the setting lacks in graphical fidelity it makes up with little touches. When returning to areas from the first game, it’s clear where you are. Extraction is incredibly faithful to its predecessor in a way that fans will really enjoy.

Towards the end of this roller coaster ride, the gameplay really hits its stride. You’ll have your favorite weapons figured out and combat will become more and more rewarding. But then it ends. While Extraction offers up one of the finest Wii-exclusive experiences and is easily the best, longest light-gun shooter ever, it still clocks in a bit short. You can take on the challenge mode and aim for a high score, or play with a buddy in two-player co-op, but both of those options feel counter to the core, story-driven game.

Regardless, it’s an extremely polished thrill-ride that pushes a dying genre forward in significant ways. If you don’t mind a short adventure that’s worth returning to again and again, it’s hard to go wrong with Dead Space Extraction.