As the Amon Tobin soundtrack kicks in and Splinter Cell: Conviction’s stunning demo menu loads up, fans of the series should breathe a sigh of relief. Tobin’s music was previously featured in the phenomenal Splinter Cell: Chaos Theory, so its presence is, at the very least, a good sign of things to come. And good things do come, but this definitely isn’t Splinter Cell as you know it.

Much like the Call of Duty series, the Splinter Cell series suffers from a case of development studio leap-frogging. Ubisoft’s Montreal studio introduced the series, but Ubisoft Shanghai has developed half of the sequels. Shanghai attempted to reinvent the series a bit with Double Agent, but it didn’t quite live up to Montreal’s entries. Now, with several years of development under their belts, Ubisoft Montreal has returned with a proper reinvention of the series.

The Xbox 360-exclusive demo features a brief mission that should give you a good idea of the new direction the series has taken. Sam Fisher is technically getting older and older, but he’s stronger and more agile than ever. Think Jason Bourne or Liam Neeson in Taken and you have a good idea of how the new Sam operates.

You begin the demo in control of Fisher during one of the game’s interrogation sequences. It’s the bathroom scene that’s been shown on several occasions, featuring Sam putting a man’s head through several urinals. Optionally, you can walk him around the room and choose which objects Sam will beat into his face. There are no peaceful alternatives here, and the violence on display is honestly pretty intense. Sam is an angry man, and while most games allow you to put some of yourself into the character, in Conviction, it feels more like Sam is injecting some of his personality into you. 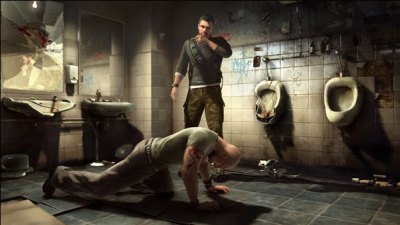 From that moment on, it’s hard not to get caught up in Sam’s lightning fast execution abilities. Even when sneaking from cover-to-cover Sam feels agile. His mark-and-execute ability allows him to swiftly and satisfyingly eliminate a room full of enemies. It’s essentially the gun-wielding equivalent of Jason Bourne punching out three guards in a split-second. With some practice, you could probably take out every guard in the demo, undetected, and do it all in a matter of minutes.

What’s equally impressive about Conviction is how it retains the series’ existing qualities. With multiple paths and plenty of hiding places, you can easily sneak through most of the demo area undetected, or slowly eliminate each target one-by-one. You even have a slew of gadgets, from sticky cameras, to flash-bangs and EMP grenades. Conviction isn’t about streamlining the series so much as it’s about adding an entire new layer of depth. You can be the shadow or you can be the swift killer – just know that Sam will be tempting you toward the latter the entire time.