If Grand Theft Auto IV was the idea, Red Dead Redemption is the execution. Rockstar’s latest builds on their story-telling pedigree while offering one of the most fun and beautiful sandbox worlds in a game yet. It also happens to be a western, which, if you haven’t noticed, are somewhat rare.

You play as John Marston, a former cowboy pulled out of retirement to kill one of his former partners. Though he works with all manner of appropriate stereotypes, Marston himself is a surprisingly complex hero. By making a man who sees the good and bad in all things, Rockstar gets to explore moral consequence without ever stepping on the player’s toes or contradicting themselves. It’s a brilliant move, creating a character who is as much in service of the gameplay as he is in the story.

This was one of the big problems in GTAIV, which asked you to relate to Niko, a charming but murderous sociopath. Marston isn’t necessarily any less murderous, but he’d be the first to admit it, and then justify why that might not be so bad considering the circumstances. 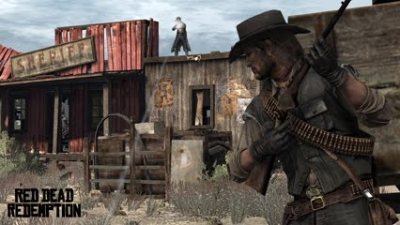 GTAIV’s story-driven, open-world-as-backdrop approach is tossed out in favour of a much richer balance. Red Dead’s wild west is closer to the sandboxes of previous GTAs or Bully (in fact, it often feels more like a spiritual successor to Bully than GTA on horseback).

When you aren’t checking your mini-map, racing from one big letter to the next in search of the next story mission, Red Dead offers a world teeming with life. It’s a cliché we’ve heard over and over again – the living, breathing world – but this is actually one of the better ones, providing plenty to interact with on a more substantial level than you may be used to with Rockstar games. Throughout the entire adventure you’ll always have a handful of tasks beyond the story missions.

‘Stranger’ missions are the most substantial. These multi-part quests are found by chance as you wander the world. Once an objective is given you’ll be left to take care of it at your leisure. It’s the kind of quest you’d expect to receive in a Bethesda or Bioware RPG, and you can even have several of them running at once. The only problem is that they’re often just a matter of running from one checkpoint to the next, with an interesting bit of plot stringing the whole thing together. But taken as one of many things on your to-do list, they feel like charming diversions more than pointless pit-stops.

Beyond stranger missions, many people will randomly ask for your help, attack, or have you perform some sort of western cliché. These range from hog-tying bounties, to shooting a noose before someone is hanged. Most of these activities tie into the game’s morality system, which provides bonuses based on your behavior. Some encounters can get a little repetitive, but overall these moments are responsible for a good portion of the game’s western flavor. 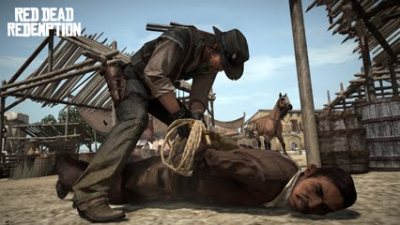 The last layer of explicit quests are the challenges, a collection of carrot-on-a-stick activities. They consist of hunting animals, gathering herbs, performing certain skill shots, and searching for treasure. They’re fun scavenger hunts, but they’re a cheap way to add some purpose to the expansive wilderness. It would have been a lot more meaningful if all your hunting and gathering resulted in more logical RPG-style rewards like materials for crafting or boosting your stats.

While the game’s sandbox lacks the depth of something like Fallout 3, it’s a huge step up from GTAIV and it’s backed by a pretty fantastic story. John Marston’s journey hits a lot of the typical plot points – you’ll meet some interesting characters, do a few missions, and then move on, eventually jumping into an entirely new territory with even more new characters. It’d be nice for Rockstar to break away from this formula, but this iteration is by far the best. Marston’s allies are brilliantly written, playing off of his neutrality to create some wild west every-man philosophizing. Games get a lot of crap for overly long cutscenes, but Rockstar’s writers make an art out of crafting long stretches of nothing but absorbing dialogue.

That said, they also have a knack for letting their stories get out of hand in the last act. That’s not the case in Red Dead – the finale is actually one of the strongest parts of the game. Without going into details, it feels like the end of a good novel, with a proper denouement rather than the cheesy boss fight and abrupt conclusion we’ve come to expect from even the best game stories. 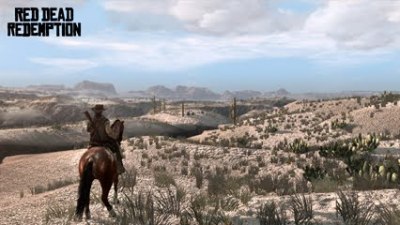 Red Dead Redemption’s multiplayer does not fare as well. Yes, you can posse up with other players and ride on horseback through the game’s huge open world. Yes, you can take on co-op missions and attack other posses. You can pretty much do everything Rockstar promised and little else. Unlike the single-player, the multiplayer sandbox is dull and lifeless. Gone are the random NPCs, the densely populated wilderness, and the variety of mini-games (poker, liar’s dice, horseshoes, etc.) that would have been amazing with other players. The town bustle is replaced with lame kiosks for fast-travel or for setting up adversarial matches like death-match and CTF.

There’s some fun to be had, but it’s strictly limited to the co-op gang hideouts. There, players can band together against waves of enemy AI. Just don’t let any enemy players get close. Player vs. player combat is ruined by ridiculous auto-aim and a broken respawn system that places you where you last died. It’s not uncommon to get trapped in endless death loops with no recourse other than asking the enemy players to stop killing you.

Multiplayer aside, Red Dead Redemption is Rockstar’s strongest example of their open-world game design. It’s not going to change the world, but it’s a shining example of how to craft a uniformly brilliant single player game.