When I heard Splinter Cell Conviction had an extremely long end credits sequence, I though it’d be fun to try to write a review while it was running. Here’s the result:

As a long time fan of the series, I found the opening hours of Conviction to be a mixed bag. Where was the Splinter Cell I knew and loved?

Sure, there’s a few moments here and there where you can sneak around, but the first few missions force you into some tough spots that make stealth almost impossible. Granted, I was playing on the hardest difficulty, and surely still learning the ropes, but I started to think this wasn’t the game I’d signed up for.

Thankfully, after the first few missions the game started to click. I stopped tripping over myself and getting into firefight after firefight. I was sneaking again, and it felt more rewarding than ever, thanks to some AI that isn’t exactly brilliant, but far more interesting than it was in previous games. 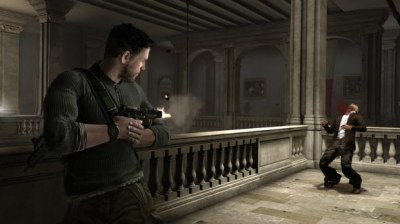 Gone is the notion of vision cones. An enemy AI can see you from across a room, which makes the parts where you sneak past a group of unsuspecting guards feel incredible. Get caught, and the game simply transforms into a new level of craftiness, where you lose the enemy’s scent and execute an entire room of them in one fell swoop. Or you may set an area full of traps. The options are numerous, and I found dying and retrying over and over far more enjoyable than previous Splinter Cell games.

Despite the changes, despite the added action elements and overblown set-pieces, this is still Splinter Cell. If not for a lack of adversarial multiplayer, Conviction may have even dethroned Chaos Theory as the best entry in the series. It certainly has the best single-player mode, and the co-op offers up nearly as much content for you and another player. Still, the lack of an adversarial spies vs. mercs mode is a nagging omission I felt any time I did something cool in the game. It left me thinking: “Yeah, that was cool, but imagine if I was doing it online with real players controlling the guards?”

There are some moments in the co-op where you’re practically playing spies vs mercs anyway. One area has you and a buddy sneaking through a large room with four terminals to hack. Each one must be babysat for a period of time, all the while guards are on active patrol. Sound familiar?

Chaos Theory cast a long shadow, one that Double Agent couldn’t escape from, but I feel like Conviction, while not better, matches it in quality. It’s a different beast, but one that’s every bit as memorable and unique as it’s ancestor. Despite all the changes and the sense that the series was headed in a more action-oriented direction, Conviction still feels more methodical and intelligent than nearly any other game out there. The old man’s still got it.