In today’s game industry Virtual On: Oratorio Tangram would never get made, and yet here it is, spit-shined and remade on Xbox Live Arcade. It looks like a 3D arena shooter (think 1-on-1 Unreal Tournament) but it plays more like a traditional fighting game. It manages this through an unorthodox control scheme that predates the left-stick-run, right-stick-aim-style that’s become an industry standard. Instead, you’ve got controls more akin to a tank, controlling a robot that is anything but.

These stylized mecha leap and dash at lightning speeds slinging endless supplies of lasers and napalm at each other. Matches typically last mere seconds, but experts can dance around shots, nimbly playing mindgames and exploiting each robot’s 50+ moves.

The crux of the game is positioning. You’re locked on to your opponent as long as they’re on-screen, making combat less about aiming and more about nailing them before they dash away. Rotating in place allows you to regain a lock, but so does jumping and dashing, placing emphasis on constant movement. Simply choosing the right trajectory to attack can make the difference between a win and a loss.

With unique controls, a wide range of moves, robots, and layers of advanced techniques, Virtual On can be a little overwhelming. High and low-level players are essentially playing completely different games. It’s not for everyone, but neither is Street Fighter or Soul Calibur. These games share a depth and complexity that seems like a dying fad. VO:OT goes one step further by carving out its own niche, with no other game to compare it to.

The port to Xbox 360 is a mixed bag. The HD visuals are sharp and cleaned up enough to sit well with any fan’s rose-tinted memories. The rules are based on the most recent arcade version, adding tweaks that the Dreamcast version lacked. Online play is generally good, with a significant enough following in Japan that you’re at least guaranteed some overseas matches. Despite this, lag generally isn’t an issue, though it does creep up in the form of unresponsive controls from time to time. Often the bigger problem is simply matching with someone. It should be nothing new to fans of fighting games, but you’ll spend more time than ever failing to match with players. Considering the track record of online gaming on XBLA though, most fans will be happy to have quality online matches at all. 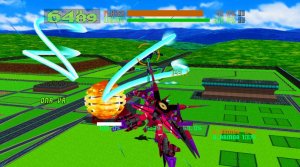 The rarely-seen arcade version of Virtual On sported twin-sticks, while the Dreamcast port adapted those controls to a single stick. The Xbox 360 version offers both options, but the twin-stick controls don’t adapt so well to the 360 pad. Truly leveraging those unique controls means keeping your fingers on all four shoulder buttons, and suffering all the carpal tunnel that will bring. It’s doubtful Sega would release a new set of twin sticks for the game, so for now it’s best to stick with the manageable Dreamcast configuration.

There really is nothing like Virtual On: Oratorio Tangram, and it’s hard to believe there ever will be. It’s a once-in-a-lifetime fighting game as worthy of high regard as genre-bending classics like Bushido Blade, Powerstone, and Super Smash Bros. Topped off with decent online play, the 360 version should bring fans and newcomers together for the first time. Don’t miss it.