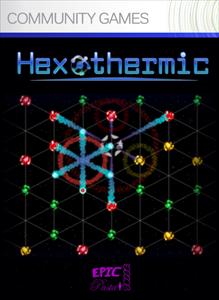 Take any classic puzzle game like Tetris, Columns, Lumines, or Bust-a-Move, and there’s a cheap Community Game knock-off. On the other hand, a truly unique puzzle game is a rarity anywhere, let alone on this small, independent games portal. That’s what makes David Webb’s Hexothermic so special – its premise is unlike any puzzle game out there, and yet it captures that fun, thoughtful simplicity that made those aforementioned classics so vital.

Hexothermic is played on a somewhat drab, hexagonal grid where colored atoms occupy each node. Adding electrons to the atoms brings them closer to exploding, causing a possible chain reaction of multiple exploding atoms. You only have a limited supply of electrons, so it’s all about predicting the outcome, and using as few as possible. The resulting gameplay is reminiscent of Peggle or Every Extend Extra Extreme, where you spend more time watching a light show than actually playing. The difference here is that a lot of planning can go into those chain reactions, so it’s not quite as casual as those titles. 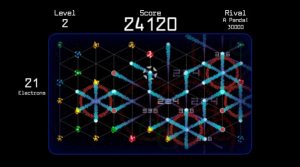 For those that enjoy a mellow, but thoughtful puzzle experience, Hexothermic won’t disappoint. It’s got enough modes to keep the basic premise fresh, including a timed mode for twitch players, and a puzzle mode for brain-teaser fans. It even features its own set of smartly integrated awards. They’re not the official Xbox Live achievements, but they’re intelligently designed to teach you how to play better.

Hexothermic may not be much of a looker, but it has polish and features where it counts. At 200 points, it’s a steal.

Community Game Briefs are short but informative impressions on the ever-expanding Community Games catalogue on Xbox Live. These are not full reviews. The verdict comes in three flavors: AVOID, TRY, or BUY. Anything can be awarded an AVOID or TRY rating, whether I actually buy it or only sample the demo. You can be assured that any game awarded the BUY rating has been purchased and played extensively.