Glenn Gamble greets me through chapped, frayed lips. It’s Sunday, day three of New York Comic Con, and while Glenn looks physically worn down, he sounds like the most enthusiastic guy in the room.

The reason, it seems, is because he loves his game. As Senior Environmental Artist/Effects Artists at Terminal Reality, Glenn is one of the people behind the next-gen Ghostbusters due out in June for Xbox 360, PS3, and PC.

Red Ring Circus: Tell us a bit about Ghostbusters, what kind of game is it?

Glenn Gamble: It’s a third-person action game. The player assumes the role of the rookie. He’s basically Egon’s experimental equipment technician. It sounds great on paper, until you realize all this dangerous stuff is getting strapped to your back.

The story is written by Harold Ramis and Dan Akroyd, the two guys responsible for the films. We also got all the voice talent and the likeness rights for all the major actors: Bill Murray, Dan Akroyd, Harold Ramis, Ernie Hudson, Annie Potts and William Atherton, the voice of Peck – if you remember him – the wonderful EPA agent from the first film.

Everybody loves Peck – absolute comedy gold with him. Basically, he is the liaison officer between the city and the Ghostbusters. The Ghostbusters are employed by the city to keep New York clean from paranormal activity. They both need each other to keep their jobs but they both hate each other. There’s a lot of backstabbing, and it’s great stuff. 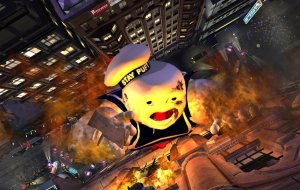 RRC: Is it a linear action game or is it more of an open-world game?

GG: It’s a linear action game because it is set on a script that they wrote. It takes place two years after the second film. You can go from the first film to the second film and then play the game. Each area is free to explore at your own leisure. When you go to the Sedgewick Hotel you can go up the elevators to explore the other stories. But it is very much a linear experience within the story confines.

RRC: So you play as a rookie, alongside the main characters?

Once we determined that the player is a fifth Ghostbuster, on the outside looking in – basically Winston’s role when they hired him – it helped bring everyone together.

One of the things people ask is why we don’t have custom character creation. The reason for that is because people identified more with the rookie when he was actually in the high res cutscenes. We’d have to cut him out of the cutscenes because we wouldn’t know how he looks if we give everybody the ability to put a beard and a backwards hat on him. Overall most people said they did want him in the cutscenes, so that’s where we made that decision early on.

RRC: Is there any kind of multiplayer? Co-op or anything?

GG: I can answer very little about multiplayer, we haven’t announced it yet. For the Wii and PS2 they have announced co-op multiplayer. With our game I can say yes there’s multiplayer, yes it’s really cool, and yes it’s very distinctly Ghostbusters. I can’t answer more questions than that. 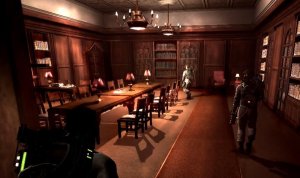 RRC: So I played the demo earlier.

GG: What did you think? I want to hear what you think. I’m actually working on the game. This is stuff I will tell people at my office. I’m going to interview you now.

GG: You have no clue how deep that goes. When you’re in the library level you can actually blow every book off the shelf. It’s not just for eye-candy either. The ghosts will use that. If you got to the construction workers at the end, you noticed they can possess objects and run into you. They can use them to teleport around the environment. We actually have golems that form themselves up from items. There’s nothing more pants-wetting than having a 20-foot golem attack you in the library.

RRC: I noticed there’s a mix of trapping ghosts and fighting off those marshmallow monsters…

GG: Yeah, we have non-corporeal ghosts which the player doesn’t have to worry about trapping. They’re just ghostly energy formed up. There’s usually a cause for it. Those marshmallow guys, they’re spawned off of Stay Puft – you don’t want to know where they come from, believe me.

We also have the ghostly ones, and they’re the ones that can really use the environment to their advantage. They don’t have to deal with the laws of reality. They can hang a chair from the ceiling and no one questions it. They can possess an object and have it run after you, stuff like that.

RRC: Yeah, I noticed there was a steel box flying at me out of nowhere.

RRC: As someone who worked on the game, I’m sure you can explain one issue I noticed with the demo – it seemed linear to a fault, where the next doorway wouldn’t open right away. I thought, this is where I’m supposed to go, but nothing happened. Then I’d run away…

GG: And then Ray would open the door for you.

GG: Yeah, I hate to say it – this is a great demo, don’t get me wrong, I love it – but it is our most contained spot in the game. That’s why we’re using it as a demo. People would sit here if they could play the game all the way through. The reason we use this as the demo is because it’s fast moving, we could push the player through. We wanted it to be all about the action. You’ve got a little hunting in there, if the player wants to try scanning something they can, but it’s very linear, it’s very obvious where to go next, and that’s why we chose this area as the demo.

In the actual game, I mean, the level right before this you’re in the Sedgewick Hotel and then you work your way through the streets of New York to get to Times Square. The game itself is very straightforward, but it’s within the confines of the area you’re in. Most architecture firms tend to be very linear like that. 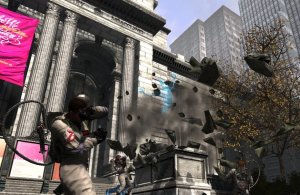 GG: No, you don’t. The reason for that is that we wanted everything to be top-notch AAA. How many games have you played in which the driving sections feel tacked on? But we did treat the Ecto-1 like a character. When I was talking about the Times Square mission beforehand, the Ecto-1 is with you, it actually has a purpose. You do get to ride in the Ecto-1 – there’s different events like that. There are upgrades to the Ecto-1, there’s actually the Ecto-1A. It’s heavily modified, it does help you out when you’re actually playing. It’s not just for ambiance.

RRC: Are there any other departures from the standard gameplay?

GG: There’s a little bit of puzzle solving, a little bit of hunting as you notice in the demo. But overall, the game is all about the action and the storyline, and the blending of the two together to really give the player the feeling that they’re the next Ghostbuster, and that this is the next step in the Ghostbusters’ story, and to make you feel like a Ghostbuster, because everyone knows bustin’ makes you feel good.

GG: You know, that’s another question for Atari. I’ll always talk, but I’m an artist and I’m always down in the trenches, and those kinds of decisions happen well over my head.

GG: But I would hope so.

RRC: Any last things you want to say about the game?

GG: Well I’d like to give a shout out to everyone at Terminal Reality. It’s not just me working on the game. I got the benefit of coming out to Comic Con, it’s been great. I wish everybody could experience the energy of the people here. We’ve got animators, programmers, sound guys, level designers, environmental artists, character artists, production people, you name it. It’s just a huge group of people who are all pouring in their best effort – their blood, sweat, and tears – to make this the absolute best game they can.