When someone like Roger Ebert critiques a movie, he does so with the knowledge of film-making, theory, and countless hours of movie-watching under his belt. He points out flaws you may miss, or opens your eyes to a film you disliked or didn’t understand. Why shouldn’t the same level of professionalism exist in game critique? Critics should draw from the knowledge of years of gaming. They should be digging deeper than the casual player. Sometimes they do, but with reviews of Too Human, many writers have failed to understand the game at even a basic level.

This isn’t David Lynch or Stanley Kubrick we’re talking about here. Especially in the story-telling front – critics are all too quick to point that out. But in regard to gameplay, it shocks me how many reviews have completely failed to convey how you’re meant to play this game. I expect the casual audience to ignore the manual, several in-game prompts, or forgo experimentation, but not professional reviewers.

Too Human is an action/loot-gathering game. Comparisons to Diablo and Phantasy Star Online are fair because of the loot, inventory management, classes and character leveling. However, the claim that Too Human‘s right-stick combat emulates the endless mouse-clicks in Diablo or the staccato tapping of the A-button in PSO are patently ridiculous. Anyone suggesting that Too Human‘s combat is automatic is simply not playing the game correctly. The advanced combat list is placed prominently alongside vital sections like skills, equipment, and the option to save your game for a reason.

For me, playing Too Human is tense, hectic, and addicting. The various nuances of combat create a constant balancing act. As the Bioengineer class, I play the protector, running headfirst into combat to build up the energy to heal my teammate, a Berserker class. The lithe Berserker must never stop moving, trading in defense for agility and punishing attack strength. He spaces out the enemies, sliding from one to the next tactically, avoiding damage with blinding speed and evasive rolls. I decide to stick to air combat, tossing enemies skyward, leaving them defenseless to my devastating finisher attacks. I constantly monitor my health, as well as my teammate’s, using healing Battle Cries or Spider shields. These drain combo level, a meter which can only be filled through combat, of which advanced techniques gain you more combo level. But it’s not just a matter of fighting and healing ad nauseum, as high combo level makes you more efficient. Do I use a combo level to heal or use a Ruiner to kill a crowd of goblins? Or do I take my chances, keeping a high combo level, offering expanded range, speed, power, and experience bonuses? The wrong choice could mean death, resetting my combo level to zero and abandoning my teammate while I wait to be revived.

The loot-gathering and character progression elements play off these choices at an even deeper level. For my Bioengineer, I chose the human path, forgoing cybernetic implants. This allowed me further efficiency bonuses via a hit counter. Each consecutive attack on an enemy without pause raises the hit counter. A high hit counter allows for stronger attacks that use up less combo level. It also plays into many of the Charm Quests, small missions you must complete to unlock the power of these Charms. Too Human even provides a leaderboard for players to compete for the highest hit counter scores. It creates a game within the game, where there are solid incentives to strategically space out enemies, keep up the flow of combat, and avoid death.

For those who haven’t tried the game at all, those last couple paragraphs may have been confusing, but the bottom line is that each aspect of Too Human‘s gameplay feeds into the other. It’s designed to push you to understand what is genuinely a different kind of action-RPG hybrid. A game like Phantasy Star Online has shallow combat, while a game like Zelda has shallow character developing-RPG elements. Too Human is deep in both aspects, and it makes no qualms about it. It caters to a rather hardcore gaming audience, just as Mulholland Drive caters to a hardcore film-watching audience. Again I’m comparing gameplay to storytelling, but wouldn’t you expect a film critic to have a better understanding of Mulholland Drive than you do?

It’s hard to imagine that many of these reviewers gave the game a proper chance. Maybe it’s because Too Human is a flawed game, and they couldn’t dig past the issues. Several missteps in every aspect beyond core gameplay threaten to ruin the experience. In some scenes the plot is intriguing and expertly presented, and in others it is rushed and uneven, containing some of the worst choreography I’ve ever seen. The Cyberspace sequences are boring and serve very little purpose beyond creating atmosphere. The environments can be jagged, with flat, pixellated textures and poor collision detection. Some of the boss encounters are unquestionably boring to fight. So while the core gameplay is refined, the aesthetics of the game are a mess. More than likely this was the result of Silicon Knights having to rebuild their game engine from scratch.

Those development woes are something not a single reviewer could refrain from citing. “In development for over 10 years” is the popular quote. It made for a hyped product that couldn’t be more fun to tear down, and with several issues, all too easy. When they failed to note that the core game is extremely fun, the consumer backlash and word-of-mouth popularity was inevitable. Not to mention they were all too quick to jump on Silicon Knight President Dennis Dyack’s internet forum drama. As if the common gamer gives a shit anyway. More than likely people caught on to Too Human through videos of Dyack telling you how to play the game. Maybe the critics should have watched those. 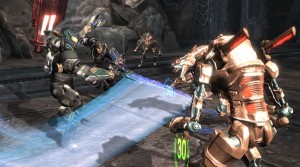 While I feel everyone is entitled to their opinion, when someone is paid to give one they should give readers some sense that they did their homework. I feel that most reviews didn’t dislike it so much as they missed the point entirely. What makes me sadder than anything is that they failed to see the potential in it. Too Human is part of a planned trilogy from an acclaimed developer that probably had a hard time getting it out the door. It has a lot of flaws, but it’s also FUN, very fun, and very addicting. The groundwork is well established, and there’s no doubt in my mind that the sequels will be amazing. Several excessively low reviews threatened to kill off this trilogy before it even got started. That the demo and consumer reaction garnered it enough sales to hopefully continue the trilogy is a relief.

I’m not saying that Too Human deserves universally higher scores. An average review is fair. But I’ve heard of far too many people who are hopelessly addicted to deny that there’s something here. So if you haven’t checked out the demo yet, try it once or twice. Explore the advanced combat, try for a high hit counter, and don’t write off the game until you’ve wrecked a crowd of goblins with a combo level 3 Berserker.