At first glance, Galaga Legions bears little resemblance to its 1981 counterpart, Galaga. Surprising, then, that it comes from the developer of Pacman: Championship Edition, a game that couldn’t have been more faithful to the original. But a history of space shooters like Galaga will tell you that remaking this classic isn’t so simple. It has been an inspiration for an entire genre, from the 16-bit era of R-Type and Thunderforce, to somewhat more modern titles like Ikaruga. It’s a genre that’s been iterated on, with each new era making the previous obsolete. The original Galaga is no longer very fun – like Space Invaders, a game whose update (Space Invaders: Extreme) simply didn’t update enough – and the success of Galaga Legions comes down to how it balances nostalgia and new age game design. 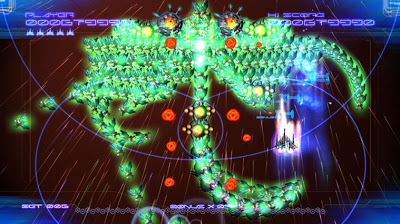 Would you believe me if I told you it gets much worse?

Thankfully, Namco hasn’t ignored more than 25 years of innovation. So while Galaga Legions is still about shooting patterned waves of alien ships, it adds modern flourishes, and a few tricks of its own. The original Galaga had no more than a couple dozen enemies on screen, but Legions tosses hundreds of enemies at you at once. In the original, you could only fire one bullet at a time; in Legions, pressing a button to shoot is optional, and your small ship is capable of firing an endless stream of death. In the original there were ways to double your firepower; in Legions, you can multiply it by twenty. It’s all bigger, flashier, and more overwhelming – the essence of the modern 2D space shooter.

But several cheesy attempts at the formula have proved that excess isn’t the only ingredient. The best shooters are defined by what sets them apart. The last true standout was Ikaruga, with its color-coded puzzle elements, in 2001. That’s a lot of time, and Legions’ biggest accomplishment is that it offers something fresh in a stagnant genre. 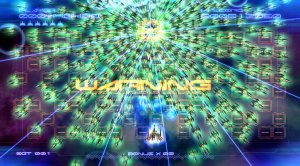 It seems redundant to warn you of anything at this point.

The novelty of Galaga Legions lies in the placement of satellites – two small turrets that can be placed anywhere and aimed in four directions. A slick overlay warns you of upcoming enemy patterns, allowing you to quickly and strategically place the satellites. Unlike your own ship, these satellites cannot be harmed. Place them in the front lines, and you can escape to safety while they do the dirty work.

The game spans five levels of increasing difficulty, which must be tackled consecutively in “Adventure,” or individually in “Challenge.” It’s a very hard game, and offering the ability to try any of the five levels at any time is a blessing. I’ll admit I never reached level five in “Adventure,” but I’d hate to get there and not be prepared for it. It’s the kind of game where you try and try again to perfect a level. The only complaint is that there’s no quick option to restart a level after an unfortunate death.

Galaga Legions is a great game, a complete reimagining of Galaga for modern times, and unlike any other game in its genre. The biggest issue facing it isn’t anything it gets wrong, but instead the timing of its release. Mixed in among the XBLA “Summer of Arcade,” it is in direct competition for your Microsoft Space Bucks with Geometry Wars 2, Braid, Bionic Commando: Rearmed, and Castle Crashers. As much as I love Galaga Legions, I can’t recommend it without telling you first that I’d buy all four of those games before I’d buy Legions. But at $60, you can easily look at “Summer of Arcade” as a single retail game, and with Galaga Legions rounding out the package.