Note: This is a review of the Bionic Commando: Rearmed Single Player modes.

There’s something amiss with the evil Imperial army in Bionic Commando: Rearmed. A pounding bass beat grows louder as you approach one of their many hidden bases. Inside, the pulsing electronica remixes of classic NES chiptunes play over their loudspeakers. A quick glance and you’d mistake this place for a red-light district. A detour down an abandoned hallway reveals bright neon casting a dramatic silhouette on the scene. In the original 1988 Bionic Commando, the enemies may have worn garish, lime-green fatigues, but they weren’t partying quite this hard.

Rearmed is a XBLA/PSN/PC update to the NES original. It takes everything that was so 1980s-badass about this classic and paints it in a shiny coat of 3D graphics and bloom lighting. Take the absurd story for instance; a rescue mission and eventual Hitler resurrection plotline are told using beautifully drawn character art. Spelling and grammar errors (the result of notoriously poor translations from Japanese) are worked into the plot as jokes. It’s shamelessly faithful to the original, even earning an M-rating for its gory, mind-blowing finale, despite having candy-colored, bloodless combat throughout. 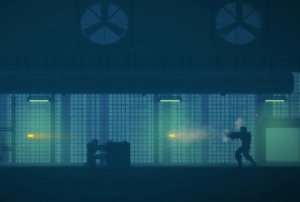 While the plot wallows in ninjas-kidnap-the-president excess, the gameplay is simple and refined. Button real estate was a commodity on the NES, and in the original game you only had a gun and a bionic grappling hook at your disposal. Think of Spider-Man’s web or Indiana Jones’ whip and you have the right idea. And with jumping a forgone conclusion in nearly every game ever, this mode of transportation sets Bionic Commando apart. Even today, after the initial learning curve, the grappling hook is an extremely precise, rewarding, and fun way to get around. Rearmed doesn’t dare to mess with the formula.

The NES version wasn’t perfect though. Because of limitations of dated hardware that prevented objects from staying in memory for too long, the original would drop never-ending streams of enemies to keep things interesting. These are mostly removed, and many of the other unbearably difficult sections are toned down here. That’s not to say the game is easy. While it is more forgiving than the original game, it’s also far harder than 95% of today’s games. Couple that with the addition of fifty challenge rooms, short gauntlets of pure concentrated hell, and it’s a game that stands out from the modern crowd.

The original game still reels in players to this day.

Bionic Commando: Rearmed acts as a brilliantly uncompromising window into the past – enlightening for newcomers and a treat for fans. But while the remake overcomes the technical limitations of the NES, ironically, modern tech issues are what take it down a notch. Loading is a pain, at least on the 360 version, with an uninteresting, mostly blank loading screen that sticks around just long enough to be a hassle. The graphics are vibrant and smooth, but the frequent screen-tearing issues are distracting. Lastly, some user-interface issues, in particular the ambiguity of the hacking minigame, cause some roadblocks.

Updated graphics are the major hook of the remake.

With Bionic Commando: Rearmed and Braid released a week apart, it’s clear that download services are the new home for triple-A old school games. With past genres given a new lease on life, current genres becoming ever more polished, and casual games bringing in a whole new market, it’s an exciting time to be a gamer.