Back in 1999, I forged friendships playing the original Soul Calibur on Dreamcast. Some came and went as interest for the game waned (after nearly two years), and some remain good friends today. Memories were made, friends grew closer, hell, even a real fight broke out. I look back on those weekends, those hundreds of Soul Calibur rounds, not with rose-tinted glasses, but crystal clarity. See, Soul Calibur was a truly amazing game. It is as timeless as Super Mario Bros., as pure as Street Fighter 2, and rarely matched, even in its own sequels.

Nine years later, Soul Calibur IV arrives to a legacy of disappointment. Soul Calibur II did little to expand the series, introducing arenas with walls, a handful of new fighters, and some retooling of old ones. Its most noteworthy addition was the “guests”: Todd McFarlane’s Spawn, Zelda’s Link, and Tekken’s Heihachi were introduced as fighters in the Xbox, Gamecube, and PS2 versions respectively. The multiplatform advertising gimmick paid off, as the second entry in the series went on to sell millions of copies. Unfortunately, SCII was little more than a small evolution of the first game, Soul Calibur: Turbo, if you will.

It wasn’t until Soul Calibur III that we saw a mild revolution. A PS2 exclusive, I personally never had an opportunity to play it, though it’s known for its deep character creator. It’s also known for being less balanced and having more technical flaws than any game in the series. Compound that with abysmal sales and it seemed the series dug its own grave.

Enter Soul Calibur IV, a buffet for fans, almost too much to take in, and at times, far too desperate to please everyone. New gameplay features include armor that smashes to pieces, incredibly rare and flashy instant kills, and new “Just Frame” attacks that require split-second timing to pull off. No fewer than three single player modes attempt to satisfy purists, newbies, and obsessive compulsives. More than 34 characters appeal to anime dorks, perverts, fetishists, and even Star Wars geeks. The beautifully smooth graphics present a world of over-accessorized, shiny, pointy warriors with absurd bouncing breasts and lightsabers. A deep character creator begs the question, “Could Ronald McDonald beat Thor in a fight?” In the words of the great Clifford B, it’s, “Bigger, better, and more badass.” Those with a penchant for subtlety will be left out in the cold.

Soul Calibur IV is about picking out the good from the bad, and ultimately your purchase is going to depend on what works and what doesn’t. The core gameplay hasn’t changed much since the original. Attacks flow naturally, requiring only simple button combinations. A good match feels completely tactical and psychological. It’s possible to play mindgames with your opponents and punish them for being too predictable.

It’s in the attempts to expand on the original formula that the game falters. “Just frames” are moves that must be executed within an exact frame of animation. A kick, followed by a second “just frame” kick must be dialed in within 0.0167 seconds of each other. Aimed at the most devoted players, who count frames of animation and speak in code, “just frames” do nothing but needlessly complicate the game. Certain characters, like Setsuka, would be powerhouses if their best moves didn’t require robotic precision to pull off. Not to mention Critical Finishes (one-shot kills that can be landed on opponents who guard too often) are rarely seen, so rarely seen that I question their existence. 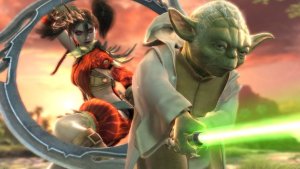 The game makes a pathetic effort to explain this.

Thankfully, many additions are welcome. The character creator is not only one of the more robust editors out there, but the attention to detail showcases the kind of dedication rarely seen outside Japanese studios. Eastern developer Namco has gone out of its way to make various outfit combinations mesh well. It leads to some hilarious moments in combat. Warriors lose their hats, exposing gigantic afros, or go into battle in full teddy bear costumes. Each item comes with its own stats that lead to Diablo-style loot gathering and RPG elements in the single player modes. While I couldn’t skip the abysmal cutscenes fast enough, the hunt for apparel and a glorified version of dress-up kept me occupied.

Being able to take my blaxploitation-era Pam Grier (wielding Astaroth’s giant ax) online is what has ultimately made Soul Calibur IV such a treat. The search for an opponent can be frustrating at times, but matches under good network conditions play wonderfully. After several failed attempts at online fighting games, this is the first game to nail it. With the Soul Calibur generation nine years older, it will give many of us an opportunity to reconnect with long distance friends.

The future of fighting games.

Extra characters like Yoda put Soul Calibur in the mainstream spotlight. Custom characters add to the fun with some truly absurd creations. Soul Calibur IV‘s attempts to be taken seriously, with dark, overdone characters, and “hardcore” gameplay additions fall flat. For Soul Calibur V, if there ever is one, I hope Namco sticks to what they do best. A game that maintained the core gameplay, with lots of crazy guest fighters, more customization, and smooth online play, could compete with Smash Bros. for the party fighting game crown. In the meantime, this mixed bag will do just fine.