The title Sicario 2: Day of the Soldado evokes memories of straight-to-DVD Blockbuster Video exclusives. The embarrassing marketing, with a skeleton holding an assault rifle, draped in a US flag, doesn’t help. Topping it off with a Rotten Tomatoes score hovering at a disappointing 64%, it seemed safe to say that this would be a Sicario sequel in name only.

Perhaps it helped then, that I watched the original Sicario just two days before. With the original fresh in my mind, I felt like I watched a very different sequel from many critics. Sicario 2 takes the pessimistic worldview of the first film and dives in even deeper, leaving behind Emily Blunt’s Kate Mercer as the one idealist we could root for. We’re left with the morally-ambiguous fixer Matt Graver (Josh Brolin) and revenge-fueled hitman Alejandro (Benecio Del Toro), off on a new mission to shake the hornet’s nest at the US/Mexican border.

The result isn’t some no-holds-barred wish fulfillment for the Call of Duty-crowd, but rather a continuation of the Sicario story that questions what happens when the Kate Mercers of the world are all scared away. If you thought Graver and Alejandro lacked morals, wait until you see who writes their paychecks. 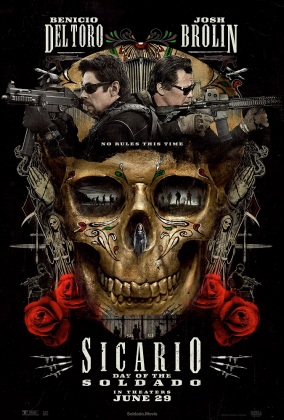 In a lot of ways, Sicario 2 is like the first film without the training wheels. That’s not to say it’s a more sophisticated movie, but without the audience surrogate of the first film, this story leaves judgement in the audience’s hands. It’s easy to suggest Sicario 2 glorifies the actions of Graver’s team — especially without Mercer there to shout otherwise — and that seems to be the primary criticism in many reviews.

My problem with this take is that it gives no credit to the creators and ignores the fact that this is a sequel. The first film establishes that Graver and his team operate above the law to stop drug cartels, and it condemns their actions through the main character. To literally wave a finger at them once more in the sequel would be redundant.

What’s worse, it feels like some looked to Sony’s marketing department for the film’s intent. Yes, “Sicario 2: Day of the Soldado” is a horrendously stupid name (writer Taylor Sheridan wanted to call it Soldado). Yes, the posters and ads for this film look like they were designed by your nephew, whose Xbox gamertag is xX_420-sh00t@-br0_Xx. But that didn’t change the fact that once the lights went out and the film started, all of that nonsense fell away for me. I was back in this world, and having just experienced it with the first Sicario two days earlier, it was obvious to me that Sicario 2 was not an endorsement of its characters’ actions, but a new challenge to their morality.

There is a darkside ending to this film that I think I would have preferred to the trilogy-establishing ending we got. Had Alejandro been unceremoniously finished off and had Graver followed through with his clean-up duty, I think Sicario 2 would have been a much harder film to watch, but ultimately a more honest one. The two fake-outs were shot so that they could have really gone either way, and I wonder if Sheridan had originally intended to take the film in this direction.