Metal Gear Solid 3 is such an unstoppable force of awesomeness that I almost want to just quit here, call 2013 a wash, and say that Hideo Kojima’s 2004 masterpiece (played in HD Collection form) is my game of the year. It’s the Metal Gear game I never saw coming — a sequel that is actually as good as the original. After the fascinating mess that was MGS2, I never suspected that Kojima was capable of good gameplay again, let alone the most methodical, intense stealth action I’ve ever experienced in a game. Sure, he messed it up again somewhat with MGS4, but it seems he knows what to do as long as you’re playing as Big Boss. Playing through MGS3 thrust Ground Zeroes into the role of my most anticipated game of 2014. 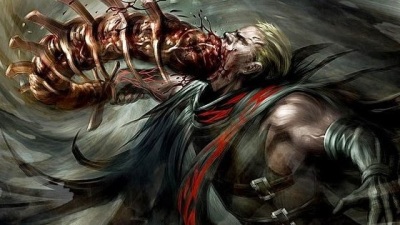 See also: demo of the year. Soul Sacrifice’s demo let you play the first chapter of the game, level up your character quite a bit, and really dig into the finer intricacies of its unique equipment and RPG elements. By the end of it I was 100% sold, and when I played the final game I was surprised to find one of the most engaging, dark, and beautifully told stories in a game this year. That the game is near endless with content, and only seems to get more with free DLC packs, makes it something I’ll definitely play more of in 2014. 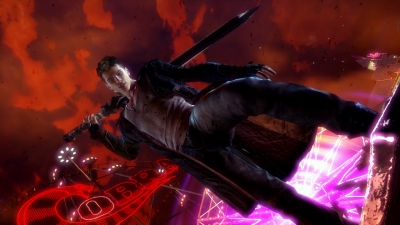 Just…fuck yes. There’s no other way to say it. DmC was fucking awesome. The combat was a blast and it felt more technically proficient than I was ever expecting. What should have been a decent brawler in the Western style of God of War and Dante’s Inferno felt more like something that could sit with Japan’s big boys: Bayonetta and Ninja Gaiden. But my favorite part? The story, characterization, and aesthetics were genuinely charming and cool, something none of those aforementioned games could get right. So fucking good. Just give this series to Ninja Theory, Capcom.

Runner-Up — Tearaway (for making me smile in an awesome way)

Oh how I wish this game would get a digital re-release on new consoles. It deserves an audience and a vibrant multiplayer community more than almost any online offering this year. It is a tragedy that I’m more likely to get a Tomb Raider deathmatch going than one of Anarchy Reigns’ stupendous 16-player brawls. I should have known Platinum Games would make multiplayer character action combat work right, but they really nailed it. It’s just so sad that few people will ever see how insane this game is. At least they can still enjoy the amazing soundtrack!

I’d be lying if I didn’t admit that Bioshock Infinite felt like a rollercoaster ride of mind-blowing revelations that left me thinking for about a week straight. Had those good feelings lasted, it would have been a shoe-in for game of the year. Infinite is such a sensory assault, though, that once the dust settled and I was able to make sense of it, I developed some deep criticisms of the game. The heart of the story is a soulless puzzle box of timey-wimey craziness that is fun to sort out, but leaves the emotions I’d developed toward the setting and characters on the doorstep. It’s still one of the year’s best, and I actually like the combat quite a bit, but there was something lacking about the finale’s sudden twists and turns.

My Second-Favorite Game of 2013 – Tomb Raider 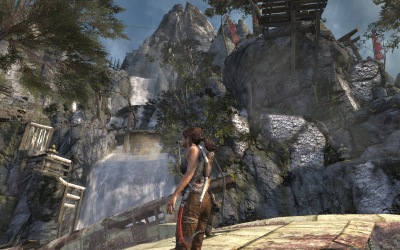 I’m a shameless fan of the Tomb Raider series, especially the original and Crystal D’s more recent entries. Tomb Raider (2013) resembled those more recent titles but blew the production values out of the water, threw in a bunch of Uncharted-isms, and reintroduced Lara for a new audience. It was looking like a betrayal of the franchise, and in the case of actual Tomb Raidering it did drop the ball, but the development of Lara, the exploration, and the combat were so well done that it didn’t matter. I could have done without some of the ridiculous kill counts towards the end of the game, but even in that respect Crystal Dynamics managed to outdo Uncharted.

There were plenty of games to hate in 2013: Aliens: Colonial Marines, The Walking Dead: Survival Instinct, and Star Trek, to name a few. I played them all, but a flat-out bad game doesn’t get under my skin as much as a game that should be good but falls on its ass. Crysis 3 is the epitome of this. Out of everything this year, out of all the shit I played to completion, Crysis 3 was the only big game I just couldn’t be bothered to finish. That’s coming from someone who thought Crysis 1 and 2 were actually pretty neat. I’ve never seen such amazing graphics phoned in with such lazy, boring gameplay and story. Bleh.

It isn’t even a contest, so just shut up now. The Last of Us is a masterpiece. It is a blueprint for the future of big-budget, Triple-A, big studio game development. If you want to do all the big, showboat things like scripted events; performance capture; a carefully-plotted, linear tale; out-of-place multiplayer; and a cliche, apocalyptic setting, you should probably aspire to do it all as remarkably as The Last of Us. The story was surprising, emotional, yet subtle and muted in all the right ways. The finale was brilliant. The gameplay — while it got a lot of criticism — was a masterful example of challenging stealth and survival horror on higher difficulties. It isn’t just my game of the year, but one of my new favorite games of all time.

Runner-Up — Nothing. Nothing came close.

If your favorite 2013 game wasn’t highlighted here, it might be because it wasn’t good enough and your opinion is wrong. More likely, though, I just didn’t get around to playing it. Here are the games I am sad I missed in 2013: