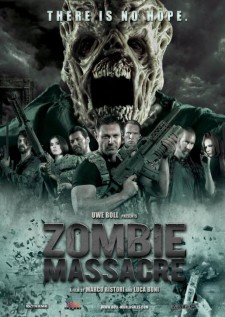 Credibility be damned, I like Uwe Boll. It’s an unpopular sentiment, but it’s true. Sure, the guy has made a lot of trashy, nearly unwatchable video game movie adaptations, but they aren’t all bad (Postal) and some of his work is legitimately great (Rampage). That, and the guy is a lovable character in the media, boxing his way to notoriety and spouting some of the best angry rants the internet has to offer. No matter how dumb his work might get, he’s entertaining through and through.

His name is what initially caught my eye when I decided to check out Zombie Massacre, and I was disappointed to learn that the film is actually “presented by Uwe Boll”. Thankfully, beyond a producer credit, he makes an absurd cameo that’s one of the film’s best highlights. More than that, though, you can feel Boll’s influence throughout. He didn’t make the movie, but he may as well have, for better or worse.

The premise seems more than a little influenced by Resident Evil. A small town is infected by a deadly virus, turning everyone into zombies. The creators of the virus stage a cover-up, hiring a ragtag team of mercenaries to go in and clean up the mess. The team is as colorful as any cast of video game characters, with a sniper, bomb specialist, lady Samurai, and your typical white-washed grunt.

Unlike most B-horror, which would dive headfirst into zombie film cliches, shooting, and gore, Zombie Massacre spends an uncharacteristically long time on each character’s backstory. It backfires a bit, as the film revels in some dumb, cumbersome dialogue, but that’s kind of the charm. This is a movie you riff on with some friends, and it provides plenty of dumb moments to poke fun at, especially as things escalate. Most scenes go on far too long, but that eventually becomes another funny quirk if you’re in the right mindset.

Zombie Massacre doesn’t quite live up to its name, as the amount of zombies killed isn’t any more than any other zombie movie. That said, I have to give the effects department credit for making so many unique zombie designs. It really is a grab-bag of gory zombies, bloody zombies, and strange mutations. 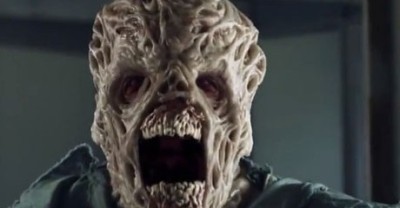 The biggest problem with the film is, oddly, how sharply shot each scene is. For all the so-bad-it’s-good dialogue and awkward action, there’s a few oddly artful shots in there. The visuals fit in more with a dreary apocalypse or disturbing horror piece than a silly-action-zombie-thing. The result is a film that at times seems to be striving for legitimacy, even when that goal couldn’t be more ridiculous. The net result is something that falls squarely middle-of-the-road, neither serious or silly enough. It sits in this spot were it’s simply too dry to get the full mileage off of its cheese-value.

There are worse films you could rent on a drunken movie night with some friends, but there are also a ton of better-bad and better-good films out there. That said, a fantastic Uwe Boll cameo and completely left-field ending make Zombie Apocalypse a worthwhile watch, even if it could have been a lot better. It’s recommended if you’re into watching corny horror movies, doubly so if you can get through a Uwe Boll movie without walking out.