Iron Man 3 adds an interesting wrinkle to the ongoing Marvel saga. We’ve had a series of loosely connected hero films all culminate with The Avengers, an experiment that paid off in spades. Now, we have the aftermath, and Iron Man 3 smartly feels like both an Iron Man sequel and an Avengers follow-up. There has been warranted concern that this whole comic book movie explosion would be a passing fad, but the interconnected nature of the Marvel films has created a wholly unique form of popcorn cinema. Iron Man 3 represents the first chapter in the post-team-up aftermath.

Iron Man 3 feels like more than a sequel. It’s almost like the next episode in a TV series that only airs one big-budget blockbuster episode per season. Every episode is an epic season finale, but if they’re all as good as this I don’t think you’ll hear anyone complaining. More than a good film, it makes keeping up with the entire Marvel saga feel more valuable.
It accomplishes this by presenting a PTSD-ridden Tony Stark. The final battle in New York at the end of The Avengers left a mark on the billionaire playboy. Apparently you don’t nearly commit sacrificial suicide by diving into a space portal without taking a serious mental toll. He has nightmares, he doesn’t sleep, and a new villain aims to catch him off guard. 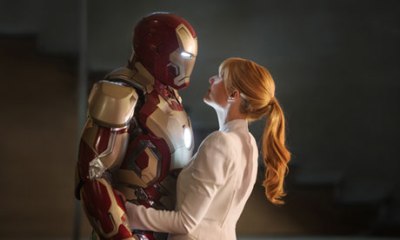 The Mandarin, a bad guy from the Iron Man comics repurposed into a terrorist, is an intimidating and surprising figure. After battling aliens, you have to wonder how a villain comparable to Osama Bin Laden holds up. That top layer of down-to-Earth evil is fascinating, showing how even when the universe is blown wide open, it’s still humanity that remains the most terrifying. But there are other layers to this character, and revealing them all here would be a disservice.
That said, while the forces that aim to take down Tony Stark are more interesting than usual, this film is really about Stark himself. It’s about the man in the iron suit battling his own personal demons and trying to be something to the one person he loves. It’s a far leap from the drunken antics presented in Iron Man 2 as well. Iron Man 3 remains light-hearted despite a darker edge, but it never dips into the obnoxious the way that first sequel did.
Directed and co-written by Shane Black, of Kiss Kiss Bang Bang and Lethal Weapon fame, Iron Man 3 has a biting snark to it that’s much appreciated. Tony Stark is a good guy through and through, but he’s also that genius/playboy/millionaire/asshole, and when he doesn’t even shy away from being a prick to a helpful young boy, you can see Black’s influences. Iron Man and Shane Black, Shane Black and Robert Downey Jr., Robert Downey Jr. and Iron Man; they all fit together like the new Iron Man suit.
Before the end of Iron Man 3 it descends into the typical superhero movie predictability more than I would have preferred, but that never overshadows the film’s accomplishments. Iron Man 3 is witty and exciting, with a dark edge and character depth you’re only going to get in this type of film when it’s build upon the foundation that Marvel is carefully constructing. The superhero bubble may burst, but if they keep this up it isn’t happening anytime soon.