Note: This is a review that typically would have appeared on GameZone, but ended up falling through the cracks. I figured a few people might still enjoy reading it.

Jack the Giant Slayer opens with what may be the worst CG effects in a film since the 90s. The scene depicts the story of the giants up in the clouds and the magic required to stop their attacks; it uses Playstation-era CG quality for artistic effect. The idea, it seems, is that bad CG is kind of like old storybook pages. The actual scene is baffling to watch, though, and it only helps to establish that Jack the Giant Slayer is a supremely misguided effort all around.
No one asked for a gritty reboot of Jack and the Beanstalk. Then again, no one asked for most of the darker interpretations of folk tales we’ve been drowning in lately. Giant Slayer follows the basic plot points of the fairy tale, only Jack is 18 and he’s quickly set up with a potential love interest in the form of a princess. After some impossibly convenient events, Jack finds himself climbing a giant beanstalk on a quest to rescue the princess, accompanied by member’s of the king’s guard. 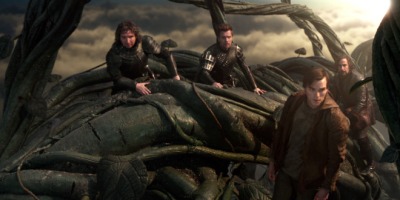 This is easily the best part of the film, as it’s both fun to watch the ascent and see the characters develop. This is one moment where the film strikes a good balance between spectacle and storytelling, and it’s aided by strong performances from the likes of Ewan McGregor, Stanley Tucci and Nicholas Hoult. It’s a highlight, but the fun doesn’t last.
There are, of course, many giants along the way. Far from the CG barf the film tries to pass on the audience at the beginning, these guys are gross in their details, if not a bit cartoonish. The problem is the way they interact with humans. As they pick up the little humans and toss them around, it’s reminiscent of the moments in the Star Wars prequels where Jedi mount large CG beasts. 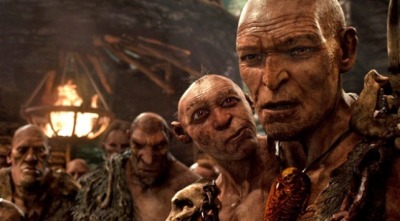 In fact, the Star Wars prequels are an evocative comparison to how Jack the Giant Slayer feels overall. Reliant on flashy CG and disinterested in proper plot flow or compelling characters, this film could have easily been attached to George Lucas and it would make a lot more sense. Halfway through, the plot reaches closure and it would have been fine to get off the ride. A more coherent, measured film would have balanced out the action and adventure and ended things there, but Jack the Giant Slayer is only just getting started at that point. What follows is an orgy of CG nonsense that drags on and on.
Jack the Giant Slayer has a few good intentions, but it’s as soulless as the CG creations it focuses so heavily on. Had it come along a decade ago, we’d probably be content to witness the spectacle and eat our popcorn. Now, expectations for fantasy action are a bit higher, and in that respect, Jack completely misses the mark. Go watch Trollhunter instead.