Skip to content
I’ve been putting this off to eternity because I had intentions of playing a few games I missed, but with 2012 full-steam ahead it seems that games like Deus Ex: Human Revolution and Dark Souls will have to wait. I’m sure they’re great. Top 10 material? That I can’t say. Here are the games that I’m sure of, in order of ever-increasing awesomeness:
Batman: Arkham City

I loved Arkham Asylum for it’s cast of villains and clever twists. What I didn’t love was the overall plot, the half-assed attempt at Metroidvania exploration, and the quirks of the game’s unique combat system. The sequel, Arkham City, doesn’t have the same level of “wow” moments that the first game had, but otherwise it’s better in just about every way.
The move from maze-like exploration to a more open, Assassin’s Creed-style world was inspired; it gave the collect-a-thon of Riddler trophies some much needed freedom, and it made navigating the environment an absolute blast.
This is the ultimate Batman simulator, or as one clever writer put it: “the ultimate role-playing game.” That’s never more true than during the Mr. Freeze battle, where the trick to beating him isn’t by memorizing a rote pattern or draining a power bar, but by outsmarting him with all of Batman’s tools. If there’s any one reason this game is on this list it’s because of that fight; it’s a blueprint for what boss fights should be: a thought-provoking test of everything the game has taught you so far.
Portal 2

Valve may take goddamned forever to put out games sometimes, but when they finally do, you really feel spoiled by their efforts. The writing in Portal 2 is almost too good for games, the puzzles often too fun and clever. I’d rank it higher if not for how completely devoid of replay value it is.
Unless you’re dying to experience the story over again, Portal’s puzzles don’t lend themselves to repeated viewing. The problem is exacerbated by a single player campaign that seems more concerned with telling a great story than challenging you; it’s almost alarmingly easy. That issue is thankfully rectified in co-op, where the puzzles all-but require two players working it all out in tandem.
A co-op DLC episode brought me back for even more fun, but as much as I adore Portal 2, I’m not going to go back to it unless Valve makes more puzzles.
Saints Row: The Third

For all the efforts to turn games into a more legitimate story-telling medium, they’re still pretty damn goofy sometimes. Saints Row: The Third not only embraces that attitude, but promotes it as a strength. No other medium so easily creates lovable characters out of hysterical violence and killing sprees.
As much as I loved the missions in cyberspace, performing takedowns on the elderly, or flying around in a VTOL, I kept coming back because I enjoyed being in the world, hearing my boss spout ridiculous one-liners, or interrupting another one of Pierce’s chess games.
In real life these guys would be sociopaths, but in a city where you can jump kick through car windows or jump off of buildings and live, I want them to be my best friends. I’m not the first one to say this, but Saints Row: The Third is “Video Games: The Game”, a celebration of what’s possible in this ridiculous art form.
Ghost Trick: Phantom Detective 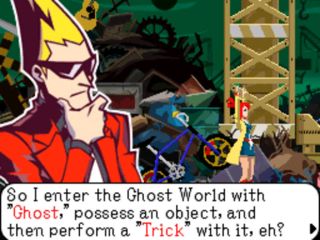 Ghost Trick does the impossible by tossing a novel’s worth of dialogue boxes at the player and being all the better for it. It’s half video game, half visual novel, and all completely brilliant.
When I wish games were more like good TV shows, with lovable casts of characters and storytelling I genuinely care about, I look to Ghost Trick as one of the shining examples. Yeah, the puzzles can be a bit frustrating sometimes, and the plot goes off the deep end on more than one occasion, but I spent too much time laughing and smiling at this game to ever fault it for those issues.
In the age-old argument of cutscenes vs. organic storytelling in games, Ghost Trick throws a pretty mean curveball on behalf of cutscenes that’s hard to deny.
Catherine

Catherine isn’t for everyone–it seems vitally important to point that out. Taking the gameplay of a dating sim, applying it to a Twilight Zone-esque tale of adultery, sex, and desire, and then framing it around an intense action-puzzle game is inspired, to say the least.
It’s also extremely polarizing, as it seems like the block-pushing puzzle elements of Catherine came under fire by many people. I can see how one would actively dislike the puzzles in Catherine–they’re stressful, complicated, and always involve some kind of time pressure–but I honestly couldn’t get enough of them, and that did wonders for my enjoyment of the game overall. The story is so good it’s worth suffering through the puzzles for, but I never suffered, so I think Catherine is goddamned brilliant.
Driver: San Francisco

I hope you’re noticing a theme with most of this list. Storytelling in games is a big deal to me. There is no video game formula more potent than a mix of good gameplay and a well-told tale.
Driver: San Francisco, expectations be damned, is exactly that. It seems impossible, but Ubisoft Reflections crafted an open-world racing game with an awesome and crazy story. Think Quantum Leap with cars and you’ve got the basic gist. It’s written like a fun season of television, with a great premise and a pulse-pounding final episode.
The actual car handling received criticism for being a bit too loose, but that was the point! The heavy, powersliding-style perfectly recreates the feel of the Hollywood car chase. That they worked the body-jumping gameplay into online races makes the whole package even more unique and worthwhile.
Bastion

What could I possibly say about Bastion that hasn’t already been said? From the iconic narration, to the painterly graphics, and highly customizable combat options, Bastion is the complete package. Undeniably an instant classic, it’s hard to think of a more definitive downloadable game experience.
Only Braid falls in the same camp in my mind. It’s comical to think we once lamented the coming death of 2D games; not only are they alive and kicking, but Bastion proves they’ve improved and matured just as much as any other genre.
Battlefield 3 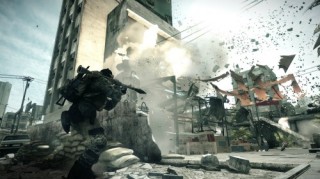 It’s easy to call Battlefield 3 an incremental update and graphical overhaul of the multiplayer-focused FPS series, but I don’t think that paints the whole picture. Every subtle enhancement, from the soundscape, to the feel of vaulting over ledges, and the feedback when firing weapons adds up to a shooter that truly feels like some next-level shit, even on consoles.
Combine that with the Battlefield formula of vehicles, destruction, and physics (a formula that’s not even remotely stale), and you just get one amazing Battlefield moment after another. DICE and the community may still be working out some communication issues, and the game is lousy with patches and balance tweaks, but the changes have never interfered with my experience, and that experience may be the most fun multiplayer shooter of all time.
That said, what put the game even higher on my list was my legitimate love of the game’s single player campaign. Yes, I’m in a serious minority, but Battlefield’s more measured take on the Call of Duty explode-a-thon was a breath of fresh air. Was it original? Hell no! But the more realistic pacing clicked for me more than any Call of Duty since the first Modern Warfare.
Skyrim

I’ve only had time to play about 30 hours of Skyrim. That’s a ton of time by most accounts, but it’s just scraping the surface with The Elder Scrolls series.
With that in mind, it may seem presumptuous to list it as my number two game of 2011. I assure you I’m serious, though. Skyrim is the reason we shouldn’t overuse words like “engrossing” and “immersion.” They need to be at full strength for occasions like this, because Skyrim really goes out of its way to eat you alive.
I’ve played all of Bethesda’s previous games since Morrowind, and Skyrim feels like the culmination of everything that’s ever been good about their games. In that sense it is an iteration, but it’s offering something no other studio comes close to. Movie trailers and book sleeves are always inviting us to another world, but Skyrim is the only thing that actually takes you there.
Dead Space 2 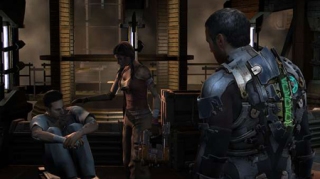 I play a larger variety of games than I ever used to, my backlog is stacked to the ceiling, and I still took the time to play through Dead Space 2 five times. For anyone that knows me and my gaming habits, this number is absurd. That’s why Dead Space 2 is my favorite game of 2011, and easily one of my favorite games of all time.
Giving protagonist Isaac Clarke a voice was obvious, but Visceral went above and beyond in crafting a character you can connect to. It seems silly, but his slightly unhinged attitude makes it easy to relate and put yourself in his boots. I know if I were stomping the life out of a Necromorph I’d probably pair it with a string of expletives as well.
Like the first game, Dead Space 2 is polished. It’s world feels dense and real. The combat is substantial. There is a real weight to everything and that makes all the coolest moments that much cooler. From rocket boots, to screaming babies in washer machines, Dead Space 2 has more truly memorable moments than any other game of its kind.
It’s a wild ride, but like every game on this list, what I eventually fell in love with was the story and characters. When Isaac makes a tough call late in the game, and finally faces his demons, I realized I’d connected with this character in way I rarely have in games.