Limbo doesn’t justify its worth the way that most games do. “Replay value”, “unlockables”, and “online multiplayer” are concepts absent from its vocabulary. Yes, it does carry the few odd secrets that are worth seeking out, but ultimately Limbo tries to win you over with sheer elegance.

Bereft of filler, nearly every moment of Limbo is unique and beautiful. You are a boy. You walk left, right, jump, or grab your way through a dark, gloomy world. You are looking for someone, but the game never says who. Limbo never actually says anything – it simply exists and leaves you to interpret its meaning.

From dark forests and caves to flooding factories and mysterious villages, Limbo’s world is stunning. Thanks to the silhouette style, depth-of-field effects, and smart use of greyscale, there’s really nothing like it. This is a game that will look beautiful forever – it’s a graphically timeless work of art. 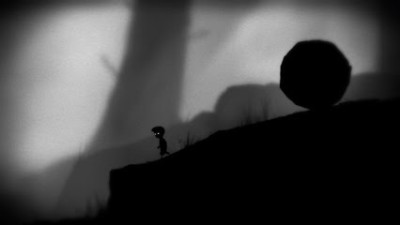 There are no tutorials or hints, but they’re not needed. You’ll discover everything through experimentation. The poking and prodding at Limbo’s rules will often lead to painful death for your character, but it only sets you back a few steps. Limbo will challenge you but it will rarely, if ever, frustrate.

Constant checkpoints help, but what keeps the more challenging moments of Limbo enjoyable are the controls and the feel of the world. Your actions and interactions are judged by the best realistic physics to ever grace a 2D platformer. You’ll never question a missed jump, and beyond some of the game’s lessons of danger there are no cheap deaths to be found. It’s both modern and sophisticated, while carrying a polish comparable to Super Mario Bros.

The puzzle design is often on par with other XBLA platform-puzzlers like Braid and P.B. Winterbottom, but Limbo stumps its audience without any gimmicks. You don’t acquire special powers, you just interact. The game’s physics handle the rest, giving Limbo a natural, logical feeling that’s almost indescribable.

Taken at face value, Limbo is essentially one extended, beautiful puzzle. Whether the story goes beyond that is really up to the player, but there’s a mood to the game that’s hard to deny. Limbo is dark – borderline disturbing – with death scenes that subtly rival games that actually show realistic gore. Fog, thunderstorms, derelict buildings, and danger at every turn keep the experience unsettling and oppressive throughout. The emotions Limbo evokes are simple ones, just as Limbo itself is ultimately a simple game.

If there’s one thing wrong with Limbo, it’s that it takes its simple elegance a bit too far. Forget price-point and hour-count – Limbo’s ideas simply feel underutilized. The ending comes abruptly, and it’s unfortunate to burn through such polished gameplay so quickly. There are a few secrets, and some of them are incredibly tricky to find, but it’s not enough. It almost seems like the developers ran out of ideas.

The short time you’ll spend with Limbo is magical. It’s a smart game that makes you feel smarter for playing it. It offers control and feel that may be a new watermark for the genre. It’s an experience that demands the attention of every gamer – if only it tried harder to keep that attention.