Exelinya Burst is but one in a long series of Xbox Live Indie games out of DK Alpla, a Japanese developer that has made one strangely compelling indie game after another. Each one typically centers around a simple, but engaging concept, repeated over and over through the course of 50-100 levels. They’re well-made, fun, but ultimately nothing ground-breaking. Exelinya Burst isn’t exactly ground-breaking either, but it’s unique in its ability to be nearly indescribable.

Throughout my time with the game I found myself searching desperately for a purpose, a goal, or winning condition. I think I found it, as I did manage to improve and make it to level 45 – an improvement of maybe a few seconds over my previous high point of level 37. Yes, you can complete several levels over the course of seconds. My pro-tip: jam the A-button maniacally until the entire screen blows up. 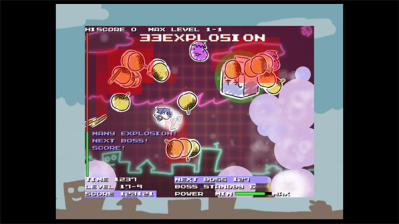 You control a little anime witch-girl armed with a grappling hook. The play area suddenly begins to fill with turnips and beets, which explode on impact when grabbed and tossed. Eventually a boss shows up – a giant plate of Tiramisu which must be dispatched quickly in order to gain a bit of extra time. Make it that far (not a difficult task), and more beets and turnips appear, followed by another plate of Tiramisu. This escalation of vegetables and desserts moves exponentially until the entire screen is exploding in a fireworks display of high-yield explosive foodstuffs.

I’m not entirely sure what compelled me to share this game with you, other than the fact that I played it. It is a game that exists for some reason, and my previous descriptions haven’t necessarily made a case for it. Either way, I had a fun enough time losing my mind for an hour that it justified the single dollar I paid.