Tetris Attack/Puzzle League fans take note – Arkedo’s latest Xbox 360 Indie title, SWAP!, is a polished variation on that classic puzzler. If you can craft wicked chain reactions, SWAP! is going to be an interesting change of pace.

The twist, if you can really call it that, is to give the player more freedom compared to Tetris Attack. Not only can you move blocks side to side, but up and down as well. The only real setback is that you must match 4 or more blocks instead of 3 or more.

The added range of movement opens up a lot of possibilities. Being able to swap any block to any part of the screen makes matching relatively trivial. But that doesn’t necessarily mean the game is easy. Its five levels quickly increase in difficulty, eventually reaching a speed that makes the freedom a crutch. You’ll have to learn to move efficiently, swapping blocks fast and thinking ten steps ahead. 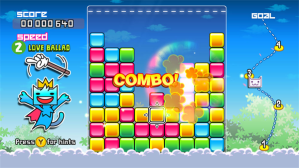 Much like Arkedo’s previous title, JUMP!, SWAP! is novel for its expert level of polish. Of course, as a studio responsible for published DS titles, it only makes sense that their Indie games achieve higher production values. But beyond that and the core gameplay, SWAP’s features are lacking: No multiplayer, a brief adventure mode, and few bells and whistles amount to an anemic package.

That may sound like a condemnation of the game, but it’s a good $3 take on an established, fantastic game, but with adorable visuals and a more casual control scheme. And for those who’ve mastered Tetris Attack, SWAP! should feel like sweet revenge for all those lost hours.