Veks and Silence takes players on a ride back to the 1990s – a time when video game maturity meant being one step above a teenager’s sketchbook. Veks may play like Metal Slug, but it’s more reminiscent of Robocop vs. Terminator or Loaded.

Veks, the character, is a bag-headed grunt with a wife-beater, a beer gut, and an arsenal of weapons. His world is a mess of slummy streets, an endless highway car accident, a junkyard, and a zombie-infested graveyard. He fights giant farting monstrosities and robots that fire rolling mines out of their metallic ass holes.

The game is low-brow, but intentionally so – Veks is introduced as an escaped convict charged with video game violence. The cutscenes are smartly used to mask some of the loading times, and their sloppy, hand-drawn style only reinforces an overwhelming air of immaturity.

The visuals are particularly impressive for how grungy and ugly they are. Normally this would be a fault, but here it’s an artistic decision. The game’s palette is garish, its textures are grimy, and the visual noise of the complete picture evokes a diarrhea portrait of mud and blood. It uses today’s horsepower to evoke the grittiness of early 3D graphics. The Playstation era was built upon a mountain of muddy, melting textures that look awful now, but certainly had a way of capturing a mood. Veks and Silence evokes that same feeling, but through style rather than a lack of horsepower. 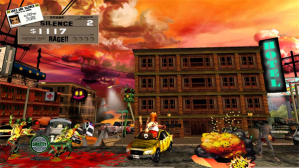 Then there’s the combat, which is half straightforward, left-to-right run ‘n gunning and half insanely-difficult action-platforming. Imagine stretches of the aforementioned Metal Slug mixed with any number of 16-bit action games like Vectorman, Robocop vs. Terminator, and Earthworm Jim.

The mix presents some uneven difficulty. Some levels involve little more than walking left to right, shooting, and looking at all the pretty scenery. Others require pixel-perfect platforming among scores of enemies or tough-as-nails boss fights. The challenge is welcome as a reminder of a bygone era, but without any consistency it can be rather frustrating.

Those tougher levels could be a deal breaker for some players, but the charm of Veks and Silence is sure to pull most players through to its conclusion. It’s the kind of nostalgia trip that’ll leave you hunting for the 360’s cartridge slot, and yet it’s still got a soul of its own – ugly as it may be.