Remember those kids in the lunch room who’d claim they had the best idea for a video game ever? They’d always have ridiculous scope, whether it was a city where you could explore every building, or a racing game that mapped every road in the country. But if you really think about it, does that sound fun? Sure, it’d be amazing for a little while, just to experiment, drive around your home town, or dig through some NPC’s desk drawers, but once the actual game starts all that stuff would just be extraneous.

Sometimes though, you need to at least try something once to see if it will work. Enter Scribblenauts, the game where you can type in almost any common noun in the English language and it will appear before your eyes. What do you do with all this power? Well, you solve puzzles, of course!

But humans don’t work well with toolboxes that consist of everything in the known world. In fact, some of the most creative ventures come from the most limited palettes. Consider Forza 2’s car painting tool, where people recreate the Sistine Chapel on their cars using basic shapes and colors. Or look at Halo 3’s Forge, where budding level designers shape multiplayer maps out of crates and barrels. People need limits because they allow for experimentation and breaking boundaries.

Without well-defined limits, we tend to make our own. What works? In Scribblenauts it’s all-too-often “wings”, “grappling hook”, and “helicopter”. Your personal toolbox may be slightly different, but it’s sure to be a fraction of the objects actually offered. By failing to cover every object interaction in the known world (an impossible task), developer 5th Cell only fuels this quirk of human nature. For every real-world interaction that works in Scribblenauts, there are ten more equally sensible ones that fail. The result is a subjective universe, one in which 5th Cell is your god.

Technically, that’s not different from any other game – Hideo Kojima thinks most soldiers are legally blind, Infinity Ward thinks you can shake off a bullet wound, and Miyamoto thinks your teenage daughter is fat. But the rules in Metal Gear Solid, Call of Duty, and Wii Fit are so few that you quickly learn to adapt. In Scribblenauts, there are more rules than anyone can experience in a lifetime. So we experiment a bit – wings let us fly, a time bomb can be activated manually, engineers will pull switches – and with every discovery of what works our toolbox fills a bit more. Eventually, we’ve limited ourselves to 10-20 objects out of thousands, and yet it’s enough to solve the entire game.

The further you delve into Scribblenauts, the more you’ll find things that don’t work, and the more you’ll limit your toolbox. But it’s not just the fault of human nature and the game’s subjective universe – the more complicated things get, the more Scribblenauts reveals itself to be broken. The game uses the stylus for almost everything from moving your character Max, to picking up objects, or dropping them into the environment. The result is not unlike the overuse of the A button in Gears of War. Putting all their eggs in one basket leads to conflicts, frustration, and mad button/stylus mashing that only exacerbates the issue. 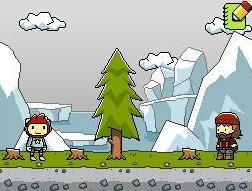 The thing is, you eventually adjust to Gears of War, because the A button may be overused, but it always works in its current context. Scribblenauts is actually broken. Often, Max simply won’t respond, and if he does he’ll walk too far ahead, flailing wildly and getting himself killed. The camera doesn’t help either because it insists on snapping back to Max every half-second. Try performing objectives with Max off-screen, and before you know it he’ll be swimming in lava or running towards a T-Rex.

As Max searches for any excuse to kill himself, the more challenging puzzles will leave you less and less likely to experiment – there’s no sense in introducing further trial and error. With hundreds of puzzles in the game, it becomes trivial to skip the harder ones, until that’s all that’s left. Eventually you’ll find yourself begging for scraps of fun while wading in the shallow end of a giant pool of content.

For some people, this will be enough. Simply seeing all the objects they can think of will be worth the price of admission. But for those looking for an actual game, Scribblenauts is more likely to leave you bored, frustrated, and worst of all creatively-drained.

Still, 5th Cell deserves some credit for trying. Scribblenauts may fail on many accounts, but it’s still an important and ambitious title. Perhaps one day it will even be held in high regard, as a stepping stone to a much more fun and entertaining game.