Are you serious? We did this dance already with Blueprint Racer 4D. Not only have you repurposed someone else’s game for profit, you’ve done it with the same game. It’s bad enough that the community games library is full of fishtank apps, clocks, wallpaper collections, and plain crappy games, now you’ve gone and turned no-effort mods into a trend.

Let me ask, did you even do any coding for this? Do you really think you deserve money for taking a pre-existing game, screwing around with the textures in Photoshop, and hitting compile?

Even worse, you haven’t improved the game, you’ve made it worse. The XNA Racer sample game is actually a pretty colorful, beautiful looking game, and both Blueprint Racer 4D and 2060 Cyber Racer turn it into a graphically noisy trainwreck. 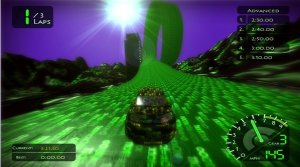 You know, Microsoft did a good thing with XNA and Community Games. They’re letting pretty much anyone develop for the 360, and they’ve spent years creating tools for it. You have a nice thing and you’re screwing it all up.

Verdict: SCAM!
(click here to learn more about our verdicts)