As we grow older and our lives become busier, the vast realm of entertainment becomes an intimidating beast. Casual gaming, serialized television, MMOs, Facebook, Hulu, Netflix – there are many channels, new and old, through which media demands our time. Like money, free time has become a commodity. Time spent on the couch has a value attached, and just as wasting money is an anger-inducing experience, so is a waste of free time.

It’s with this notion that The Maw sounds like a fantastic game on paper: it offers varied gameplay across a short campaign, at a reasonable price, downloadable right from your couch. If only every other minute you’re playing didn’t feel like a massive chore. 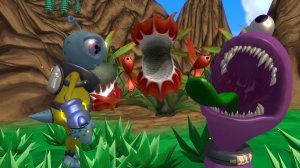 The Maw is, at it’s roots, a 3D platformer. Stepping into the house that Mario 64 built is never a simple task, but it seems like the mistakes made by a long-line of copycats are repeated here, albeit in a charming, indie-cool way. As the main character, Frank, you drag the leashed Maw around a mysterious world, allowing it to consume the local wildlife. But with a set limit of things to eat and a strict quota to reach before progressing, the game is simply a collect-a-thon in disguise.

While each level brings a new twist, with the Maw gaining a new ability, the core gameplay remains – you traverse the land in search of fuzzy creatures, watch the same eating animation play out for the hundredth time, and repeat. Combine that with one of the slowest running speeds to ever grace a video game, and it quickly becomes an exercise in tedium.

The Maw is an empty promise from beginning to end. The colorful, visually appealing opening level raises expectations, but flat, barren, ugly areas round out most of the game. Feeding the Maw appeals to that same sense of wonder that makes Katamari Damacy such a treat – unfortunately the process is so heavily scripted that you have no influence on how big he ultimately becomes. The characters have some charm, but the developers did little to expand on some cute noises and funny expressions. The Maw grasps at originality, but always finds it just out of reach.