The story is always the same – an unassuming office building hides action figures, arcade games, and people who make games. A journalist is left to add color to an ultimately empty experience, shuffled into the nearest, closed-off room to preview a new game. At least that’s how it seems. Maybe game studios are too secretive, or maybe game journalists don’t push enough, but the inner workings of a studio are practically a trade secret. Sure, documentaries can be revealing, but they’re largely the work of the studio or publisher marketing the game. What if a journalist could spend a few weeks, months, or even years at a studio? Imagine the stories they’d have to tell.

There are several obstacles in the way of such an exciting venture. Studios and their publishers hold their properties close to their chests. Even a poor review is cause for a publication being blacklisted. On-site previews are conducted in rooms closest to the front door, preventing any journalists from peeking at anything they shouldn’t see yet. Interviews are rarely candid, with only the best journalists and the most outspoken designers going beyond marketing-speak. For publishers, journalists are the bad guys. There’s less and less incentive to deal with the press when a company can simply create their own portal for news. 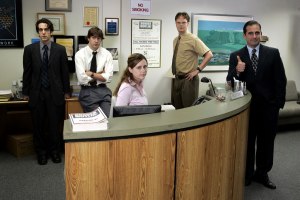 An Example of an Unassuming Office

On the journalist’s end, there aren’t enough people pushing for more in-depth content. The brightest minds in game journalism are typically offered jobs by game developers anyway. The ones that are still around do their best, but it must be hard to change things in a field where most are content to play their games and write their horrible reviews. It’s an industry where sex sells, people won’t read that boring crap, and “our publisher is going bankrupt.” No wonder it’s an environment that stifles innovative reporting.

Many of these obstacles are the kinds of things the entire field of journalism faces every day. The difference is that in other areas many writers still put themselves out there. A profile of a game studio is an impossible idea, yet there are reporters who go to fucking war.

A Second Example of an Unassuming Office.

Maybe it’s not so much that it can’t be done, but that no one has sorted out the logistics. A journalist would have to commit to a solid period of time at a development studio. They may be relocated, staying in hotel rooms, removed from their regular work. They’d most likely be forced to sign non-disclosure agreements until the game the studio is working on comes out. Further complicating this, a studio may have multiple titles in the pipeline – some would be so far off that the story may have to exclude any details about them. Ultimately, it’s a chance to take and a time investment for both the magazine/website publisher and the game studio. The story may not be released for some time, and the cost of placing a journalist on site at a studio may be quite high. There may be things that will be revealed that the studio didn’t want people to know. On the other hand, the final product will no doubt ignite interest in both the writer and the publication, as well as the game studio itself. It’s a timeless idea for a piece, one that can build steam over time and inspire others in the field towards more creative ventures.

Perhaps my enthusiasm is little more than an extremely rookie outlook. I’ll admit I don’t quite understand the realities of games journalism, as someone working to break into the field. It’s just hard to imagine that this really can’t be done, no one wants to do it, and no swarming masses would read it.