Like a painting or poem, the following games demand only a few minutes of your time. They are examples of games explicitly designed to be art. Some, like The Marriage, use game rules to symbolize life experiences. Others, like The Graveyard, barely qualify as a game, using minimal interaction to complement storytelling.

The Passage is played in a 100 x 16 pixel window. Its title relates to both the extreme aspect ratio and how time unfolds throughout the five minute game. Many obstacles will impede your progress, much like the roadblocks of our real lives. Along the way you may meet your life partner, or you won’t. Over time, it becomes more clear what is going on in this simple piece of interactive fiction. It’s then that the story plays out its depressing finale.

What’s amazing about The Passage is how it draws more emotions out of its players than most ten-hour long, 1920 x 1080 resolution blockbusters.

CHECK OUT THE PASSAGE

Games are an amalgamation of rules, visuals, sound, writing, and more. But it’s the rules that set games apart from other mixed media. The Marriage strips away as many peripheral elements as possible, leaving you with little more than a set of rules to follow and basic visual feedback. It’s as much a commentary on the state of game design as it is about marriage itself – and despite the looks, it is in fact a game about marriage. The Marriage is a representation of the balance and fragility of a life-long relationship between two people. More than that though, it argues the power of game rules as avenues for stories and emotion.

CHECK OUT THE MARRIAGE 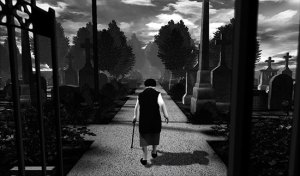 Imagine a beautiful painting of an elderly woman making her way, cane in hand, through a crowded graveyard. Now imagine yourself in the world of the painting, taking control of the woman. Not too thrilling, huh? Well, just as a piece of art won’t always make you happy, an art game won’t always be fun. Surrounded by death, you shamble along a monochrome path to rest on a park bench.

There’s a lot to be said for such a simple premise, but it’s at this point that a song plays and reveals a bit too much of the designer’s intentions. The website for the game describes it as “realtime poetry” and “storytelling without words” yet it ultimately betrays this basic premise through song lyrics. The Graveyard is an art game insofar as it is challenging – a depressing experience that requires patience – but it fails by losing focus on a simple idea.

CHECK OUT THE GRAVEYARD 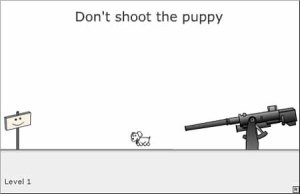 While not explicitly an art game like the previous entries, Don’t Shoot the Puppy wins points for unique game design. Never has such a short game left me feeling so manipulated. It’s all about how you play (or don’t play) it. Don’t Shoot the Puppy is also probably the only game on this list that will make you laugh out loud.

CHECK OUT DON’T SHOOT THE PUPPY